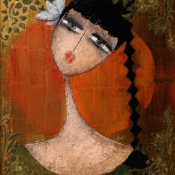 Tylek (Jiří Tyleček) was born in Ostrava. He emigrated with his wife Tyleček (Zdeňka Tylečková) in 1983. He lived and worked partly in France, partly in Corsica.

In Japan, you can find their work in Mihama Museum. Tylek´s and Tyleček´s output is represented in all over the world. She paints landscapes and still-life arrangements, he created women in their varied appearences.
Tylek and Tyleček are highly respected and were awareded for example a diploma "Arts, Science et Letters".