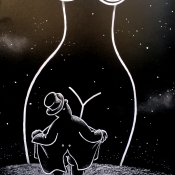 Sculptor, painter, graphic artist, actor, screenwriter, director, stage designer. František Kratochvíl graduated from the Academy of Fine Arts in Prague in 1959. In 1960, he became a co-founder of the Black Theatre of J. Srnec where he worked till 1974. Subsequently, he founded Independent authors' Black Theatre of F. Kratochvil. Approximately the same time, he started to cooperate with the short film companies, various television companies and the Czech TV.

During theatrical activities where the black theater ensemble traveled round the world to theater festivals, Kratovchíl was also devoted to humorous graphic drawings. His main topic has since ever been the relationship between a woman and a man, always expressed with a humorous metaphor. The idea for the series of paintings coverered with a book called Cherchez la Femme grew in New York in 1974, when the author took part in theatre exhibition with the Black Theatre round North America and Canada.