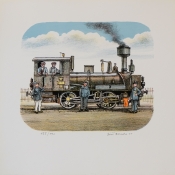 He graduated from National school of Graphic Arts and then continued his studies at the Academy of Arts. With one of his favourite themes being means of transport and traffic, he became chairman of the study and documentation of the railway history group. He also was a longtime member of the SČUG Hollar group (such as A. Born, J. Anderle,..). The most influential of his pieces is probably Těšnov - a 6 piece cycle of graphics, portraying the no longer existing railway station. Even though he primarily focused on technical pieces, he's also well known for his lithographies of Czechia and foreign countries, postmarks and ex libris.