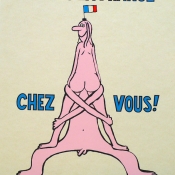 Czech cartoonist, illustrator, screenwriter and director of animated movies. He is unforgettable for his simple line. Among his best known works belong Bob and Bobek - Rabbits from the Hat. Since 1990, he has been devoted especially to political cartoons. Jiránek´s  artwork also decorates the birthplace of Sigmund Freud in Příbor. Parables of Sigmund Freud frequently appears in his drawings as a prototype of a psychiatrist or psychologist. After Jiránek is named also one asteroid  discovered in 1997.