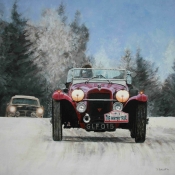 *1954
Originally a designer at the Avia car plant, editor of the Automobil magazine since 1983. In 1990, he left freelance to devote himself fully to artistic activities in the field of automobiles and motorsport, which has been his main interest since childhood.

Autodidakt, however, published his drawings as early as 1973, when he was studying mechanical engineering, the largest motoring magazine, Svět motorů. Since then, his work has gradually published other magazines, such as Motoristická současnost, Automobil, AutoTip or the German Fernfahrer, and his illustrations have become part of several book publications. His paintings are owned by many Czech and foreign car racers, managers and companies. He is also the author of the color design of Škoda Motorsport factory cars in the 1980s and the Avia racing formulas.