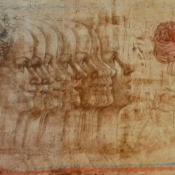 Jiří Anderle is a famous Czech painter and graphic artist. He completed studies at AVU (the Academy of Fine Arts) – painting under the guidance of Antonín Pelc and graphic art under the guidance of Vladimír Silovský. Anderle worked as a technician and actor in Černé divadlo (The Black Light Theater), which influenced his style. He became popular – especially abroad – in half of sixties. At the beginning of seventies, he worked at VŠUP (The Academy of Arts, Architecture and Design in Prague) as an assistant of Zdeněk Sklenář and Jiří Trnka. Jiří Anderle has organized dozens of exhibitions around the world and gained many prizes. His work is represented in New York's Metropolitan Museum and the Pompidou Centre in Paris.