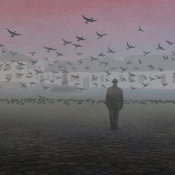 *1982
She paints fine oil paintings containing realistic elements, but the overall concept and color give them a rather unrealistic or dreamlike character. She tries to paint aesthetic and positively tuned images that are pleasurable to look at while also being a cause for reflection or amusement. She likes landscape painting, playing with colours and creating poetic impressions. In addition to painting, she is involved in graphic design and her own clothing brand, whose prints she designs.
She was born and studied in Prague, and from 2004-2012 lived in Andalusia, Spain, where she was a member of Aplama, an art association of the city of Malaga. She also had her first solo exhibition in Malaga in 2008. She has lived in the Czech Republic since 2012, but likes to be inspired by motives from different parts of the planet, her own experiences or the inner world.