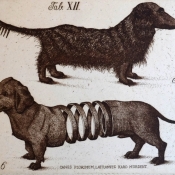 During his studies at secondary school (1974-1978) at Myjava, he was intensively devoted to art creation. He represented his work for the first time in the Small Gallery Slovnaft, where he exhibited his works in the field of promotional graphics (posters, occasional prints). Then he began to create lithography and copper engraving. Since 1993, he is primarily interested in graphics, illustrations and cartoons. He regularly participates in international art competitions and his drawings appear in Slovak and Czech periodicals.