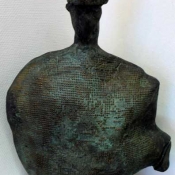 Professor Jan Hendrych is a famous Czech sculptor, painter, renovator and university teacher. He has gained plenty of world awards.

He completed studies in secondary school and University, which were both specialized in art and applied art. Between 1963–1966, he studied postgraduate at the Academy of Fine Arts under the guidance of prof. Karel Hladik and prof. Karel Lidický. Among his classmates belong many young artists who have dealt with the structural abstraction (Tomalík, Nešleha, Beran, Málek, Koblasa).

For the first time he took part in exhibition as a sculptor in 1964 in Liberec. First solo exhibitions were then realized in 1966 in the Gallery of Youth in Prague Manes and again in 1967, in Letohrádek Ostrov.

Life in last political regime was not easy for him. He could finally create and exhibit freely up the Velvet Revolution in 1989. Beyond all past questions, he has fulfiled his potential completely. His output in on pubic display in many Czech and even world galleries and also in private collections. His career as a techar is also very valuable and seminal for many auspicious artists.