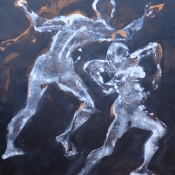 As an artist, he was boycotted by the Communist Regime between the years 1969 and 1989, so he did restoration of historical buildings for living. After the Velvet Revolution, he could finally live and create freely.

His output is represented in all over the Czech Republic but also for example in Centre Georges Pompidou in Paris.