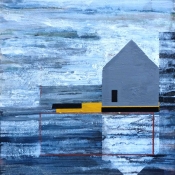 Though he belongs to a generation of artists emerging in the 1980s, has long been unknown to our environment. And that's because he stayed abroad until the 1990s. Kočí began his art work in 1972, when he created tiny realistic figurines. Then he studied at art schools in Texas and Madrid. His knowledge of practical sculpture came first from studying 20th-century classics such as Hans Arp, Constantin Brancusi, and Henry Moore. But he didn't pay much attention to sculpture after that.