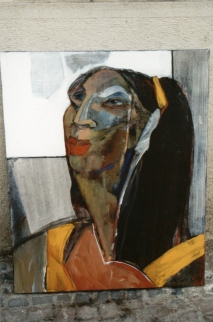 Czech Art for the Brazilian Lidice, 2003

During WWII, the Czech town of Lidice was destroyed by the Nazis; all men over the age of 14 were killed and the women and children deported to concentration camps. After the war, in memory of this devastating tragedy, many countries throughout the western world renamed their towns Lidice - and Brazil was one of those countries.

In 2003 Galerie La Femme was part of an international project, Czech Art for the Brazilian Lidice, which came about thanks to the support of the Czech Ministry of Foreign Affairs and the Brazilian Ambassador in Prague.

Miroslav Lipina and Katerina Kotikova headed the project. Mr. Lipina selected seven well-known Czech artists who are recipients of awards not only from the Czech Republic but from many other countries as well. They are: Antonín Sládek, Milan Chabera, Richard Kočí, Boris Jirků, Václav Benedikt, Michal Halva and Tomáš Hřivnáč.

They created many works of art which were shown at private viewings in Rio de Janeiro, Brazil, and in the Czech town of Lidice; and were attended by the Czech Ambassador to Brazil, Dr. Vaclav Hubinger; the General Consul Dr. Sarbochova; and Claro, Rio's representative.

Galerie La Femme donated paintings worth 610,000 Czech Crowns to Lidice's new cultural building in gratitude for the local population's support of the project. In Prague, the unique art exhibit ended with festivities in the Toskansky Palace, attended by Dr. Hubinger and Dr. Zdenek Lycka, Director of Regional and Cultural Relations of the Czech Ministry of Foreign Affairs.