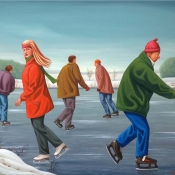 Jan Šafránek was born in Hradec Králové. He began his career as a painter of film posters. In 1975, he moved to Prague, where he set up a studio and devoted himself fully to painting. After moving to Vienna, he studied drawing and painting at the University of Applied Arts under the guidance of professor Carl Unger. In 1982 he settled in Sydney, Australia. Since 1990, he lives partly in Prague, partly in Vienna.