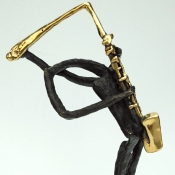 He graduated at the Brno Technical University. He makes only one original cast. Repeating motifs include birds, musicians and figures with wings. Even human beings, however, deform to the form of the birds. Birds for the author mean liberty and freedom. He admires the music, and that is why the musicians often appear in his work. He is represented in galleries in the Czech Republic and abroad and also in many private collections such as Canada, Japan, Switzerland, Norway. He lives in Brno and Senetářov. In 2001 he was awarded with the prize of the Masaryk Academy of Arts in Prague for artistic creative activity.